Moving patients to a higher level of care and incorporating pharmacology with that care have both been around for hundreds of years. In today’s pre-hospital setting, skilled medical professionals are finding innovative ways to reimagine both! 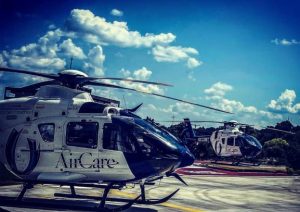 The University of Mississippi Medical Center (the only academic medical center; only Level 1 hospital; only Children’s hospital; and only Level IV NICU in Mississippi) began operating AirCare — its helicopter air-ambulance program — in 1996 with a single helicopter. In response to the overwhelming need across the state, AirCare opened a second base in 2009, a third base in 2016 and a fourth base in 2017. Today, AirCare operates five helicopters and is the only air-ambulance program with specialized teams and equipment to handle adult, pediatric and neonatal patients across the entire state in Mississippi. AirCare operates under the UMMC umbrella as the Mississippi Center for Emergency Services (MCES). “AirCare has been involved in pushing the envelope of critical pre-hospital care since the program began,” explained Dr. Damon Darsey, MCES and AirCare Medical Director. “It is our clinical responsibility to bring the highest level of care to the patient, allowing advanced critical care procedures and therapies to begin as soon as our medical team arrive on-scene –whether at the bedside or on the roadside. The clinical philosophy of the AirCare team has always been to bring UMMC’s emergency and critical care experience, equipment, pharmaceuticals, diagnostic equipment and blood products to the patient.” 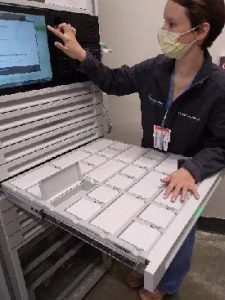 One component of Flying Care to People® means having the right medications – as if the patient were already in the intensive care unit or emergency department at UMMC. To make that possible, MCES added a dedicated critical care pharmacist to the team in 2020: it was the first such addition to a transport program in the nation. AirCare now carries a pharmacy stock that exceeds $100,000 on each helicopter with the ability to carry specialized medications pulled from the MCES automated drug dispensing cabinet or the UMMC main pharmacy. AirCare also participates in a collaborative partnership with UMMC’s Department of Pharmacy to rotate medications before expiration to reduce waste and improve efficiency.

The role of the pharmacist touches every aspect of pre-hospital care: operations, management, clinical, quality improvement, research and education. The role is not suited for everyone, but for those with an interest in the fast-paced world of pre-hospital care and a desire to think outside the box it is an exciting career path. The pharmacist at MCES, Kelsey Beatrous is a PharmD, BCCCP and in just a few short months has become a valuable member of AirCare and the Critical Care ground transport teams.

“I trained at the University of Mississippi Medical Center, so I had seen our AirCare crews transport patients to the Adult Emergency Department,” Kelsey explained. “I was always impressed with AirCare’s clinical knowledge, clear communication, and the aggressive, evidence-based care they provided before they even arrived in the ED. When this pharmacy position opened, I knew it was a once in a lifetime opportunity to work with this team and serve the highest acuity of patients across our state in a unique capacity”.

Adding the pharmacist role has created new avenues for grant-funded research and pre-hospital and disaster response opportunities. It has also opened the door to conversations and patient care discussions that are moving the program deeper into quality and performance improvement.

One example of this innovation is the creation of a MCES-specific drug pump library. Customizing the medication library for our newly acquired drug pumps would not have been possible without a dedicated pharmacist. Most often, this work would be contracted out, costing the program time and money. Being able to include specific medications that AirCare and the Critical Care transport teams need regularly in a short amount of time, was a definite win for the program.

Another example of how the MCES pharmacist assisted the program was by providing infectious disease and antibiotic education to crewmembers. AirCare responds to a number of trauma and sepsis cases and has a high usage of antibiotics. The education provided through the pharmacist allowed for better stewardship and created new policies that saves the program money without decreasing the need for IV push antibiotics. There have been several examples where medication research has been beneficial to patients and the AirCare and Critical Care transport programs.

Quality Improvement is always at the forefront of everything MCES does and utilizing the expertise of a pharmacist is no exception. Kelsey has initiated a number of quality improvement initiatives and projects. She created a Pharmacy Committee and serves on the QA committee as a case reviewer.

Having a pharmacist who understands the dynamics of pre-hospital care has allowed the program to be much more active and innovative in the operational management of the program. Choosing to bring a pharmacist into the program shows the level of commitment to the patients we serve.

“There was no model to follow,” said Dr. Darsey, “but we knew that if we wanted to continue pushing the envelope in pre-hospital care we needed to expand our vision of what the program could be.”

Kelsey agreed that her role has been to build the program as she goes. “There is no blueprint or path for what a pharmacist should be in this setting, especially since as far as we know the first pre-hospital team to employ a pharmacist.

“What has been most exciting for me is to serve on a diverse team of forward-thinking, evidence-based practitioners who are always looking to raise the standard for pre-hospital care. My medical director has empowered me and included me in projects that are unavailable to pharmacists in other settings. To experience these exciting challenges and opportunities so early in my pharmacy career has been incredibly rewarding.”

Since coming to the team, Kelsey has been actively involved in the addition and deletion of adult, pediatric and neonatal drugs; protocol updates; adjusted drug par levels; weekly cycle counts; medication recalls and returns. Other activities have included creating a narcotic task force; developing a standard medication list and protocol for disaster response; assisting with COVID vaccine preparation and rollout and creating a MCES pharmacy committee – and the list continues.

Including a pharmacist on the MCES team allows us to provide an additional level of advanced care to our patients. Flying Care to People® is more than just a catch phrase – it is the innovative medical approach AirCare takes to every patient encounter.

AirCare has been CAMTS accredited since 2015 and operates in conjunction with MedTrans Inc.